Holiday Villa Beach Resort Langkawi is set on the mystical isle of legends, Pulau Langkawi (or Langkawi Island ) situated on the north west of Peninsula Malaysia. The 4-star picturesque resort is sprawled over 13 acres of land, fronting on one of the island's finest beach at Pantai Tengah.

At Holiday Villa Beach Resort Langkawi, all the guest rooms and suites are well furnished with modern touches and conveniences for total guest comfort. For dining, the 24-hour Lagenda Restaurant offers a wide range of local and western cuisine. It is surrounded by well landscaped garden.

Other dining outlets are The Mario's Italian Restaurant , Tropical Beach & Snack Bar, Matahari Lounge and Sunset Karaoke Fun Pub. In addition, there is a swim up Pool Bar and the Sunset Terrace offers a spectacular view of the sunset. 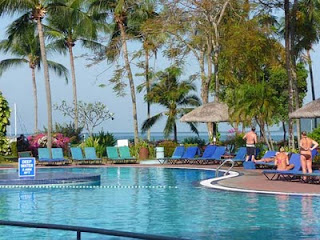 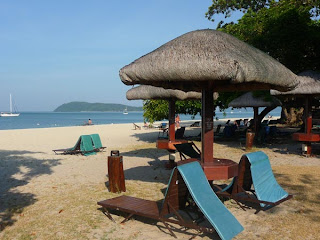 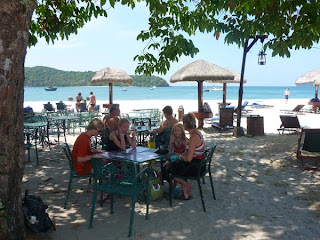 You are welcome to Holiday Villa Resort and Spa Langkawi
Posted by roslankasim at 4:58 PM 1 comment:


UNITED Youth Football Club (UYFC) from Pandan Indah in Kuala Lumpur and Langkawi Kenari Kids emerged champions of the Under-12 and Under-10 categories respectively in the second Kedah Kenari Kids football carnival.

UYFC had overcome Kota Damansara of Selangor 2-0 in the Under-12 semi finals earlier while Kenari Kids B outplayed their A counterparts 2-1.

The Under-12 final ended in a stalemate at the end of regulation time as both teams were unable to score and the outcome was decided by a penalty shoot-out.

UYFC prevailed in the shoot-out by converting all their first four spot kicks while the Kenari Kids B only scored from two of the first four kicks.

Ahmad Firdaus and Mohd Izzat Iqmar scored for the Kenari Kids while Nabil Ramli’s kick was saved by UYFC’s goalkeeper, Mohd Aizat Roslin. Arisul Hakimi sent his kick out past the upright to hand the title to UYFC.

In the Under-10 final, Langkawi Kenari Kids dominated the proceedings against Hicom-Honda A from Sungai Petani to win by 2-0.

In the 2009 carnival, Bintang Biru foot- ball club from Prai in Penang was the Under-12 champions while Hicom-Honda Kids from Sungai Petani took the Under-10 title.

A total of 16 teams (six in the Under-10 and 10 in the Under-12 category) from Singapore, Thailand, Selangor, Kuala Lumpur and Kedah competed in the two-day carnival on Dec 17 and 18.

Dr Hamdan said the tournament was orga-nised to uncover young talents to be groomed into quality players to serve Kedah which was in line with the aspirations of the Kedah Football Association.

He said six Kenari Kids training centres —two each in Alor Setar and Sungai Petani, and one each in Jitra and Langkawi — that were set in Kedah a few years back had proven to be of benefit to the state.

“A good example is the success of the Kedah Under-15 team in 2010 who qualified to represent the Asia-Pacific region in the Manchester United Premier Cup World soccer finals in Manchester in 2010.

“The success of the team has fuelled the interest of several young players and the demand to enrol in our training centres has increased two fold.

“It is hoped that the Kenari Kids carnival will produce more exciting young players to serve the state in the future,” Dr Hamdan said.