A Fond Farewell to Dr. Ghani - Do you remember about my title Langkawi Herbwalk with Dr. Ghani ?

This statement from Langkawi link -

...Dr. Ghani has left Langkawi permanently for the academic halls of the Universiti Kebangsaan Malaysia ( National University of Malaysia ) to set up a university curriculum for the study of traditional Malay and Islamic medicine .

"Tears fill my eyes thinking of the need to leave my home of 24 years .There are many reasons but i would say the most important is that of national interest.The university had comfirmed their urgent need for me to develop the degree program in Traditional Malay Madicine and Islamic Medicine.It is indeed a heavy burden upon my shoulders but i dare take the challenge .After all ,this is what i had dream of doing 7 year ago - to eventually build a school ,to teach traditional Malay medicine and lift both to heights of excellence .... 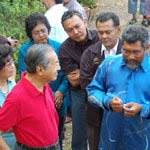 ..While we are glad that the UKM has the foresight to create such a progressive university programme and to recognise that Dr.Ghani is the only person in the world who can run it,i am saddened to know that we're lost one of the nice people on the island .And most despressing of all,who is going to preserve all the rare plants on the island ?
...articles from Patrick Low ..
This is one of articles from Dr. Ghani to langkawi link ...
Pepper the King of Spices - Lada Maharaja Rempah .
Do black and white pepper come from the same fruit or they two different fruits ? It may surprise you to know that black and white pepper are the same fruit ( Piper Nigrum ,L) harvested at different stages of maturity and processed differently.Black pepper is harvested and dried when the fruit is unripe and green .That is why black peppercorns come out black and with a wrinkled surface ( the outer skin of the fruit still intact ) .The white pepper is harvested when the fruit has turned orange when almost ripe . The fruit is soaked and the skin peeled off leaving the seed ,which is then dried .
The elders of the island told me that a long time ago ,Pulau Langkawi used to be known as Pulau Lada .As early as 1007 AD ,the Indians had recordedthe origin of pepper from the large Pulau Lada of the Lancavi Archipelago .This is evidence of an ancient settled community in Langkawi . I believe that Langkawi had been originally populated by the Achinese ( of which I am one ) ,the Siamese Muslims from southern Thailand and people from mainland Kedah .The lived in different areas of the island : west coast the Siamese,and the east coast the Kedahans.Over the years,intermarriage between them had necessitate the opening of more inland areas like Ulu Melaka ,which is multiethnic.
Black pepper should be hot, very pungent in taste and have a strong aroma. The grains should be hard and not very full of wrinkles .Small,shriveled grains that break easily between your fingers are of inferior quality .The white pepper on the other hand is less hot and pungent because it is devoid of the outer pungent and aromatic skin .The powdered pepper that you buy is invariably adulterated with other ingredients .In order to get pure pepper powder ,it is best to grind whole peppercorns yourself .
We are well aware of the culinary use of pepper ,but did you know that pepper helps in the digestion of food by stimulating the production of saliva and increases the flowof gastric and intestinal juices ? it also improves circulation of blood ,removes gas and enhances absorption of nutrients . 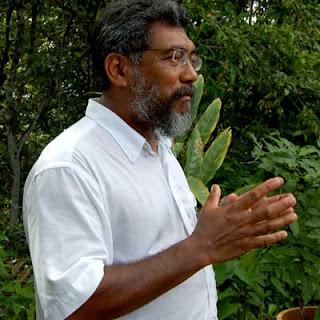 Pepper is is known as the king of spices because almost all countries use pepper in cooking .In the olden days,pepper was used as a meat preservative because of its antifungal and antibacterial properties .As medicine ,pepper helps relieve pain , especially rheumatic pains.It reduces fever and chills because of its diaproretic ( sweat-inducing ) properties ,and makes a good cough remedy when mixed with honey .
Here is a simple treatment for tooth-ache :
'Put 8 black peppercorns in a half cup of boiling water .Let its stand for 10-15 minutes and use this as a mouth wash while still warm.Leave this pepper tea in your mouth ,bathing the score tooth until the solution cools .Spit it out and repeat the procedure several times . (Note:this is for pain relief only.You would still need to see your dentist )
.. from langkawi link ...
Posted by roslankasim at 7:30 PM No comments: