Yoga with Marc & Meng Foong
Pantai Cenang now has its own yoga centre called Yoga Now. It is run by Marc and Meng Foong - an Irish and Malaysian couple who have already been teaching yoga in Malaysia and overseas for many years. They recently moved their yoga centre in Kuala Lumpur to Langkawi, tempted by the peaceful environment, the fresh clean air and the beautiful nature.

They teach daily morning and afternoon classes in their new centre, situated in a beautiful traditional Malay wooden house ten minutes walk from the beach in Pantai Cenang. They also run yoga retreats for those who are interested in taking the practice of yoga a little further.
Drop in classes are RM50, a 5 Class Pass is RM225 and a 10 Class Pass is RM400. All classes are 2 hours long. Local residents are entitled to a 20% discount on all these prices. Free water refill (1.5 litres) is also available when you attend class.
For more details about Yoga Now, their classes and retreats, and plenty more information on yoga, you can visit their website 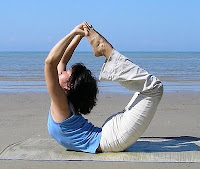 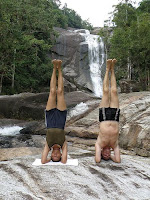 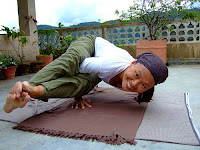 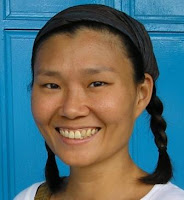 Lai Meng Foong
....first came in contact with Yoga as a child and much later was blessed with the chance to study Yoga in India under different teachers. Former Malaysian National Sports Aerobics Champion, Meng Foong has more than twenty years experience in practising Yoga and teaching bodywork. Today, retired from aerobics, her focus is purely on teaching Yoga.
Meng Foong speaks Mandarin, Cantonese, Malay, English, a little Hindi and French. 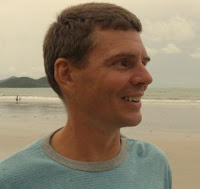 Marc de Faoite
.....is originally from Ireland, but has spent the last twenty years living overseas. He has practised Yoga for more than twelve years and spent more than a year and a half in India studying Yoga, Sanskrit, Meditation and other techniques including Watsu and Reiki under a variety of different teachers. He has taught yoga in France, Ireland, India and presently Malaysia. He believes in sharing his experience and enthusiasm for Yoga.
Marc speaks English, French, Dutch and Spanish and is presently making slow, but steady progress in Mandarin, Cantonese, Malay and Tamil.
Co-founders of Yoga Now, Meng Foong and Marc first met in an ashram in India in 2005 while studying yoga. A year later they ran into each other again in the same place. Then Marc moved to Malaysia in 2007 to be with Meng Foong. Now they are married and teach yoga together. In 2009 they moved their yoga studio from Kuala Lumpur to Langkawi. They are both vipassana meditation practitioners.
by : Shirley, 29 September 2009 - langkawi-gazette
http://www.yoganowmalaysia.com/
Posted by roslankasim at 7:40 AM No comments: