JAPANESE STYLE BAKERY
The loaf ,a Japanese style bakery & bistro,which is owned by Tun Dr. Mahathir,has been established to complement Langkawi to be the world class resort in South East Asia .Hence our mission is to provide the highest quality bakery products to satisfy every sense of seasoned and experienced tourist from allover the world . 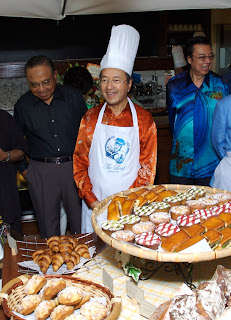 BAKERY
There are nearly 60 kinds of bread you can choose from traditional style to creative and out of this world bread .For example ,our rich and crispy Croissant uses the highest quality of Belgian butter ,and Galette Coco Chocolate have chocolate and coconut flakes in brioche dough . Both are highly recommended by Tun Dr. Mahathir .
RESTAURANT
Why don’t you dine at The Loaf ? They offer breakfastset menus that include our toast bread and pastry .For lunch, they have great sandwiches and mouthwatering burger using our premium bread .And last but not least ,you will enjoy our exquisite and the finest dinner selection with the romantic view of Telaga Harbour .Breakfast set starts at RM18.00.
PASTRIES
Cake ,tarts,and cookies are always available .Also the prepare our special desserts for lunch and dinner .
The Loaf is open : Friday – Wednesday (8am – 11pm)
Located : Telaga Harbour Park ,Pantai Kok
Tel / Fax : 604-9594866 / 604-9594803

General Information About This Langkawi Island
Geography
Langkawi, a cluster of 99 islands separated from mainland Malaysia by the Straits of Malacca, is a district of the state of Kedah in Northern Malaysia and lies approximately 5I km. west of Kedah. The total land mass of the island is 47,848 hectares, while the main island of Langkawi itself has a total area of 32,000 hectares. The main island spans about 25 km. from north to south and slightly more from east to west. The coastal areas consist of flat, alluvial plains punctuated with limestone ridges. Two thirds of the island is dominated by forest-covered mountains, hills and natural vegetation.
Climate
A sunny, hot and humid, tropical climate with an average annual temperature of about 25 degrees Celsius.The rainy season is during August/ September, although there are occasional showers throughout the year.
Population
Only four of the 99 islands are inhabited- Pulau Langkawi (the main island), Pulau Tuba and Pulau Dayang Bunting - and the population is an estimated 64,792 of which 90.4% are Malays. The other ethnic groups consist mainly of Chinese,Indians and Thais.
Districts
The main island is divided into the six districts of Mukim Kuah, Padang Matsirat, Ayer Hangat, Bohor, Ulu Melaka and Kedawang.
Economy
An agro-based economy of padi and rubber cultivation and fisheries is fast being overtaken by a tourism driven economy, taking into consideration, the natural, unspoilt, ecological beauty of the islands and major Governmental emphasis.
Language
The official language is Bahasa Malaysia, although English is widely used.
Currency
The currency, known as Malaysian Ringgit (RM), is issued in denominations of RM 1,000, RM 500, kM 100, RM 50, kM 20, RM 10, kM 5,RM 1. The coins, referred to as 'sen' (cents) are in denominations of 1 Ringgit, 50 Sen. 20 Sen, 10 Sen, 5 Sen and 1 Sen.
Exchange Rates
The current exchange rate is about:-1 US $ for RM 3.801 Pound Sterling for RM 4.001 Deutschemark for RM 1.80100 Yen for RM 2.501 Singapore dollar for RM 1.80BanksBanks open for business at 9.30 am and close at 3.30 pm, while on Thursdays they are open from 9.30 am to 12noon. Friday is a religious holiday for the state of Kedah. Money changing facilities are available at most banks. Most of the larger banks in Malaysia have their branches in Kuah, Langkawi as well as at the Airport.
Customs
Being a duty-free port, hotel tariffs and retail goods are exempt from government duty. Visitors with more than 48 hours stay in Langkawi are exempt on items like wines and liquor (I litter), tobacco (200 cigarettes), apparel, cosmetics, souvenirs and gifts, food and food preparations and portable electronic items (one item). Video cassettes require clearance from customs. Antiques and historical items need the relevant licenses from the Director of Museums, Malaysia. Illegal drug trafficking is prohibited in Malaysia and carries the death penalty.

Immigration
Visas are not required by citizens of Commonwealth countries (except India and Sri Lanka), most European countries, United States, Japan, South Korea. etc. provided their stay does not exceed three months. Citizens of Asean countries do not require visas for visits of less than a month. Citizens of Afghanistan, Iran, Iraq, Libya, Syria, and South Yemen do not require visas for visits of less than two weeks. Citizens of Albania, Bulgaria, Czechoslovakia, Hungary, Poland, Rumania, Russia and Yugoslavia do not require visas for visits of less than a week. Citizens of North Korea, Cuba, Vietnam, People's Republic of China, South Africa and holders of Hong Kong identity certificates are only allowed to enter Malaysia subject to visa approval. Citizens of Israel are not allowed to enter Malaysia. However, it is advisable to check with your nearest Malaysian embassy/consulate as regulations are subject to change.Valid travel documents/passports is a must for entry and they should he valid for a period of not less than six months.
Credit Cards
International Charge and Credit Cards like American Express, Visa and MasterCard, as well as local Bank cards are widely accepted in Langkawi as well as throughout Malaysia.
Internet Cafe'
Refreshment centres with Internet access are available. Rates vary from RM2 to RM4 per hour.
Posted by roslankasim at 3:46 PM No comments: