The Fairies Of Seven Wells

About a kilometer from the Oriental Village (behind Cable Car) is a beautiful waterfall cascading over seven natural pools.The beauty of it not only attracts mortals but fairies too,who take delight in the cool and invigorating mountain stream. 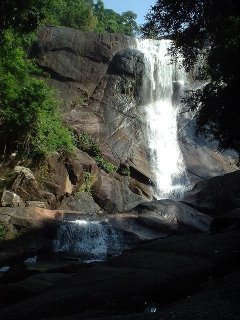 The memerizing beuty of these spiritual damsels is said to be a ssight to behold and puts one in immediate Valhalla .But unfortunately very few have sighted them .
There is a story of a mountain prince who lived near these waterfall ,who made great efforts to capture one of these beauties but failed . 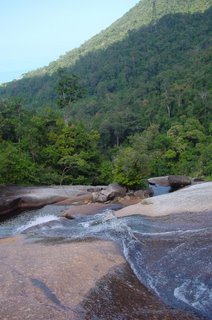 It is said that these fairies usually bathe in this mountain stream in the wee hours of the morning .They sometimes leave behind their toiletries.Usually it is a couple of "limau purut" (a kind of sweet aromatic lemon,the juice of which used to scrub the body) and "sintok" (a kind of root used as a shampoo).If one finds these ,and bathes with them at the seven wells,it is said that bad luck is washed away ?
Posted by roslankasim at 8:01 PM 2 comments:

Try looking for the "perfect refence book" at the store before travelling ?Its always kind of hard to find one with both colourful pictures and satisying information.Either one is always lacking .
"Malaysia Map and Travel guide" is the very best the most information .
What else ?
Included the maps for drivers ,through as details as a street maps but they are good enough for guidelines .Many people have played a part in the making of this book ,but it is the support of Malaysia Tourism Board in providing most of the informationand picture .

For who ?...
For Driver ,Backpackers ,Adventurers,Shoppers and anyone going to Malaysia alone are with a family especially for the first timer

(Including Road Map of Thailand and Phuke Travel Pack )

Posted by roslankasim at 3:41 PM No comments:

As mysterious as the hidden treasure above ,are the case of Langkawi.
The huge outcrops of limestone that make upthe majority of the hills in Langkawi ,houses hundreds of cave ,well worth exploring .Sculptured and design by Mother Nature ,over million of years ,these geological masterpieces ,are legaciesof utter awe and wonder .
Of the hundreds of caves ,there are about 24 which have been designated adventure caves ,worth exploring .The Word for cave in Malay is "gua" .

Free upgrades plus save up to 74% when you cruise the Caribbean with Carnival. Hurry! This offer won't last long.

Named after its inhabitants,the Malaysian fuit bats, this cave is located along the Kilim River. Accessible only by boat, you can then walk along a wooden platform through a mangrove swamp, leading directly to the cave. The stalactites and stalagmites are of gigantic proportions, forming weird figures reminiscent of other-worldly creatures.GUA DANGLIEntered from the sea at low tide, the cave reveals a fabulous array of stalactites. Giant limestone curtains, umbrellas and mushrooms also spring out of the sculptured walls.The chamber tunnels up to a small hole, exiting into a bamboo forest where a second cave is located about 30 metres up a slope. 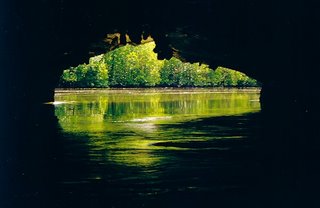 This cave is unique in that the Kilim River actually flows right through it, navigable by a small boat at low tide.View the limestone formations and colonies of bats,although the "buaya" or terrifring man-eating creatures of swamp no longer lurk.

Easily accessible by boat from Tanjung Rhu, the cave can be reached with a climb up a wooden ladder.Legend has Gua Cerita or "Cave of Legends" is linked with the mystical Battle of the Big Birds. It was here apparently that the Princess of China was Kidnapped and held captive. Faintly legible on the walls of the cave are some ancient inscriptions, said to be verses from the holi Koran

Nestled on the coast of Pulau Dayang Bunting,this cave is very accessible with the boat ride passing by some very echanting island.This is one of the most intriguing caves,with the stalagmites forming bizarre figures that boggle the mind.

Hawaii: Free nights in the Islands

Around the cave is an abundance of trees,creepers, ferns and palms, providing a pleasant and serene environment.Stalactites and not stalagmites are predominant,with a huge serpent-like one hanging down from the roof.

Accessible from Kuah by land, the cave is dome-shaped and lined with oddly-shaped white and grey limestone, with a huge serpent-like stalactites hanging down as if guarding the cave's secrets.

A few minutes' drive from Kuah, this is the most accessible cave on the island. Its fairly large chamber contains an exquisite variety of stalactites and stalagmites with fascinating formations.

This cave has some of the most impressive stalactites and stalagmites in all of Langkawi, many of which are as attractive as quality marble.Thousands of bats roost within, shrieking through without hitting anything.

Located at Sungai Batu Gajah in the heart of a mangrove swamp, the cave rests in a limestone hill. Skeletal remains of humans, animals and primitive tools have been discovered here, although the age of the bones has yet to be ascertained.

On the western coast of Pulau Dayang Bunting, this "Cave of the Banshee" is recommended only to serious cavers with mountain climbing experience as the ascent to the cave demands great climbing skill and absolute physical fitness. Surprisingly, there is an absence of stalactites and stalagmites. Instead, the huge gloomy chambers are permeated with lurking shadows, reinforcing the superstition that the cave is haunted by the spirit of a woman who, like Dracula, lives on the blood of humans.

Florida: Save up to 20% on hotels
GUA PINANG

Located off a tributary at Kuala Kubang Badak, this cave is situated in an area which was under the sea thousands of years ago, as indicated by the abundance of ancient seashells embedded in the cave walls.
Posted by roslankasim at 3:16 PM No comments:

Allow Only 200 Tourists A Day to Pulau Payar

Allow only 200 tourists to Pulau Payar in Langkawi at one time. That is the proposal by Sahabat Alam Malaysia (Friends of the Environment Malaysia) for the carrying capacity of visitors to the island, which is the only marine park on the West Coast of Peninsular Malaysia.At present, 700 people visit the island per day. The State Government is considering to allow only 400 visitors into Pulau Payar a day.Sahabat Alam co-ordinator Mohd Nizam Mahshar said the big number of tourists to the island was worrying as it posed a threat to marine life."The recent proposal was to reduce visitors to 400, but considering that the natural condition is bad, we suggest that the limit be reduced further to between 100 and 200 visitors per day."It is better to reduce the number of tourists to Pulau Payar now. When the ecological situation has improved, then maybe the number could be increased," he said at a Press conference here.This measure was part of several steps, which included a study of the impact of tourism at Pulau Payar.

The Pulau Payar Marine Park is situated in the northern part of the Straits of Melaka, 19 nautical miles south of Langkawi and encompasses the islands of Pulau Payar, Pulau Lembu, Pulau Segantang and Pulau Kaca which are surrounded by coral reefs. The marine park teems with a fascinating diversity of marine life and vegetation.Many endangered species of fishes and marine organisms live within the sanctuary. Measuring 2km long and 1/4 km wide, Pulau Payar is the most popular of the islands as its sheltered waters are ideal are for snorkeling, diving and swimming. Among the enchanting dive spots is the "Coral Garden", an area covered with bright, multi-hued soft corals.There are several sandy beaches on Pulau Payar island for picnics as well as hiking trails for those who wish to explore the island. Just off the beach, one can indulge in the thrilling experience of feeding baby sharks. Facilities include gazebos, picnic tables, barbecue pits and restrooms at selected areas. There is also a Visitors' Centre that provides information about the marine park

Situated towards the east of Pulau Payar are some easy wreck diving sites. Dozens of sunken fishing trawlers are found around Pulau Kaca creating an artificial reef. Depth is about 18 meters which makes it an easily accessible wreck to explore. Abundance of fish life, mollusks and nudibranchs can be found among the scattered vessels.

This rocky outcrop is located 13 km towards the west of Pulau Payar. It features steep rocky terrain plunging into the sea to a sandy bottom at 20 meters. Nurse shark, barracudas and jacks are very common here. Lobsters, moral eels and mollusks are also commonly sighted