IRONMAN LANGKAWI MALAYSIA TRIATHLON
EVENT DATE : 27 February 2010
Ironman Malaysia takes place on Langkawi, a popular island resort destination in Malaysia. It's tough not because of the course, which consists of a very warm swim, a rolling bike and a relatively flat run course. It's tough because it can get really hot, especially during the run. How hot? In 2001 temperatures that reached 43 degrees Celsius (which is very close to 110 degrees Fahrenheit for anyone who thinks in those terms).
Swimming
The day begins with a two-loop swim in Kuah Bay which starts and finishes alongside a giant eagle statue that dominates the Jetty Point port area. 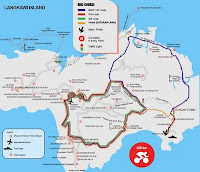 Running
It is the run that makes the race in Langkawi so tough. The terrain isn't that challenging - it's the heat that the athletes face as they go through the marathon that makes things difficult. After the fourth loop is complete, they run one kilometer back to the jetty, and end the day at the beautiful finish line which is just meters short of the spectacular eagle statue, a welcome beacon at the end of what will no-doubt be a tough day of racing. 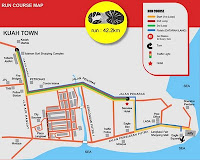 
736 athletes to participate in Langkawi Ironman 2010
February 15, 2010 11:09 pm
LANGKAWI, Feb. 15 — A total of 736 athletes from 41 countries have confirmed their participation at the Langkawi Ironman 2010 here on Feb. 27, event director Datuk A. Chandrakumanan said.
Defending champions for both men and women categories respectively, Luke Mackenzie and Belinda Granger, both from Australia, were among those who confirmed their participation, he said when contacted.
The athletes were from Germany, Japan, South Africa, New Zealand, the United States, Italy, Argentina, Belgium, Australia, Canada and Asean countries, he added.
He said the organizer also received participations from 225 local athletes, including former national cyclists Mohd Hafiz Wong Abdullah.
The champhionship offers US$ 50,000(RM170,500) in cash and involves three disciplines, namely: swimming (3.8km), cycling (180km) and running (42.2km). (PNA/Bernama)
DCT/utb
Posted by roslankasim at 8:21 AM No comments: